Home › Media Coverage › So, what exactly is Iran doing in Syria?

So, what exactly is Iran doing in Syria?

Much global media attention has been devoted during the past several days, to the visit of Israel’s Prime Minister Benjamin Netanyahu to Europe, where he has made no secret of his intention to toughen the positions of Prime Minister May, Chancellor Merkel and President Macron, regarding the future of the JCPOA nuclear agreement with Iran. However, a no less interesting meeting featuring a senior Israeli official took place just days before, when the country’s Defence Minister Avigdor Lieberman met his Russian counterpart Sergei Shoigi in Moscow. The pair are widely reported to have discussed the creation of a ‘de-escalation’ zone in southern Syria. The arrangement would in effect see Iranian troops and their Hezbollah proxies vacate the area, which directly borders Israel.

It is no wonder that the Israelis are alarmed at the prospect of an Iranian military force menacingly poised next door. Just this week, for the umpteenth time, Iran’s Supreme Leader Ayatollah Khamenei publicly called for Israel to be “removed and eradicated.” Given this context, Lieberman’s mission in Moscow is eminently understandable. Entrenched in southern Syria, Iran are hardly the type of neighbours likely to invite the Israelis next door for a cup of tea. 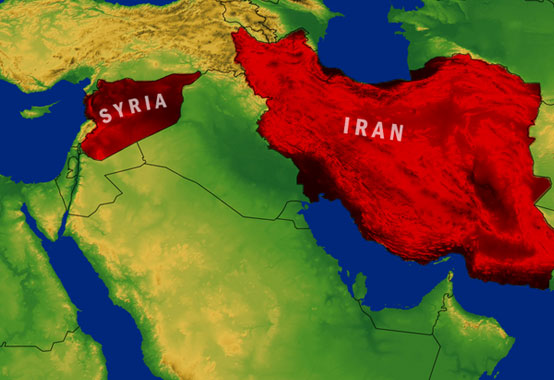 But the discussions over southern Syria are in danger of overshadowing a more basic, but rarely-asked question – What on earth is Iran doing in any part of Syria at all?  Their military presence there is hardly a trifling matter. Although Iranian officials have obfuscated over the extent of their involvement, with at least 1,000 Iranian troops killed in the Syrian conflict, it is safe to assume that Iran has deployed a significant force. And that does not even take into account the Hezbollah forces which have been critical in propping up the Assad regime at various points of the Syrian Civil War.

In short, Tehran has allied itself extremely closely with Assad and invested large-scale military capability in his survival. But why? After all, it’s not as if Iran were a direct neighbour to Syria, protecting its borders in the face of a chaotic implosion next door. And it’s hard to argue that the two countries are even ideologically aligned – Traditionally, the Ba’ath Party which Assad and his father have spearheaded in Syria, has been at loggerheads with the revolutionary Islamist model so enthusiastically promoted in Iran since 1979.

And so, the question remains, why is Iran in Syria? Quite simply, Tehran cannot resist the vacuum of power in Syria and the prospect of filling it. Syria offers Iran the opportunity to pursue its true agenda – Expansionism and regional power. Tehran’s leadership is not interested in the vagaries of regional influence. It wants naked power. That is why it has successfully installed Hezbollah as the de facto ruler of southern Lebanon and helped it become a strong political force in the country. That is why Iran is looking to take advantage of the absence of authority in Yemen, to create a stronghold against its adversary, Saudi Arabia. That is why Iran continues to meddle in Iraq. The deep instability of Syria makes it an attractive target. And from Assad’s point of view, he is hardly in a position to turn down the offer of military support. It is a quid pro quo which works well for both sides for the time being.

Syria is complex. There are myriad competing forces on so many levels. But international leaders and indeed the global media should be in no doubt over Iran’s motivation for involvement. It has no national security reason to be in Syria, and no historic interest in the country. Quite simply, Iran is in the business of expanding its power and control throughout the region.

As such, the question mark for Russia and other world powers should not concern Iran’s involvement in southern Syria, but Tehran’s presence in Syria as a whole. By asking this question, the likes of May, Merkel and Macron might realise that when it comes to the JCPOA, they are dealing with a ruthless power-hungry regime. More to the point, Iran views the acquisition of nuclear weapons as a key component of its quest for power. In other words, Iran’s disregard for international norms over Syria is the very same disdain it holds for global standards when it comes to nuclear armament.