Recently, a few occurrences demonstrated to the public that Iran’s idea of freedom and of international sports is very different to the accepted norm. Starting with the Darya Safai’s tweet, which stated in short form the gloomy reality: “Dorsa Derakhshani , Iranian chess champion, expelled from national team for not wearing the veil”. There were more details. As expanded in the washingtonpost article, both Dorsa and her brother, Borna (15), were kicked off the national Iranian team. Dorsa was sent packing because she at her appearance at the Tradewise Gibraltar Chess Festival 2017 she did not adorn the headscarf, and Borna was sacked for agreeing to play with an Israeli component.

As reported in rferl, Mehrdad Pahlevanzadeh, head of the Iranian chess federation, accused the Iranian teen siblings of “hurting Iranian national feelings”. He went on to say that “As a first step, these two will be denied entry to all tournaments taking place in Iran, and, in the name of Iran, they will no longer be allowed the opportunity to be present on the national team”. He continued, stating “we’re considering measures that will prevent similar incidents from taking place in future tournaments”. He also stated that “what shouldn’t have happened has happened, our national interests have priority over everything”. 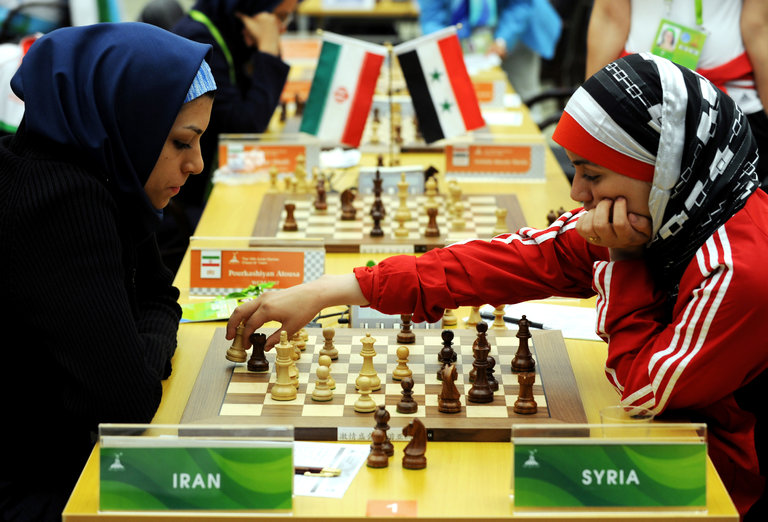 There are two points to be highlighted in the context of this incident.

The crux of the problem – is that Iranian ideological interests have priority over everything – including fair play, international conventions and respect for sport norms. The question to be posed, which unfortunately is not posed by the press covering this incident – is why Iran is allowed to host international tournaments and even participate (as a national entity) in international tournaments, when they state categorically that they do not and will not respect the accepted behavior code of these tournaments?

The second point to note in this context is the existence of a bold, courageous young Iranian generation, that ignored the Iranian demands, paying the full price. They remind us of the bold step taken by Nazi Pakidze, the US chess star, who boycotted the Iranian tournament in February, due to the fact that the players are forced to don headscarves. See chicagotribune on that.

It would seem that the young generation has more courage and more moral standing than the Swedes and the Sports organizations, who bow to Iranian national demands, while sacrificing their own moral code.

We will conclude with one more stark reminder of the gender violations in Iranian sports, as illustrated by another recent event. Women in Iran dressed like men, in order to try participate, as observers, in a soccer match in Iran. As reported in usatoday they were caught, blocked from entry, and their future punishment for this is still to be determined.