Last month, the tragic photograph of Syrian toddler Aylan Kurdi, who drowned off the coast of Turkey, broke hearts around the world, giving an achingly human face to the refugee crisis that has affected millions as a result of the brutal Syrian civil war.

Much of the press coverage of Kurdi’s shocking death, as well as the plight of hundreds of thousands of others who are perilously making their way West from war-torn lands, has pointed fingers at European states and called for a humane response to the crisis.

Back east, the wrath of the world was turned on ISIS, whose atrocities continue in Syria and Iraq almost unabated – with some analysts even speculating that it is “winning,” and that Western strategies to defeat terrorism have failed where the militant group-turned-state is concerned.

Other root causes of the chaos, and parties responsible for it, have not received as much attention – let alone criticism – from the media. What of the staunch supporters of the Assad regime, the second side to the conflict? There would be no conflict, mass massacre and flood of refugees if it wasn’t for the Assad regime and its upholders. 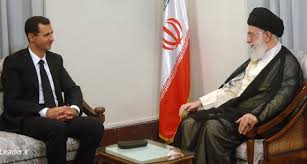 Some have placed responsibility on the shoulders of Russia’s Vladimir Putin, for his rising role in creating and perpetuating the Syrian crisis: see, for example, this recent Washington Post editorial blasting American inaction on Putin’s Syria machinations; or this article in Middle East Briefing, which concludes point-blank that “Russia’s increased military involvement in Syria will result in prolonging Syria’s civil war,” as well as hinder the “already faltering” efforts to topple ISIS. Assad himself expressed his confidence in the ongoing Russian support, as reported in the guardian.

And what of Iran’s role in the tragedy? Assad himself, in an interview with the Hezbollah’s al-Manar television network, as reported in the guardian, acknowledged Iran’s great role, and is even quoted as saying: “The power of Iran is the power of Syria, and a victory for Syria is a victory for Iran, we are on the same axis, the axis of resistance”. In an interview with the Russian press, Assad had the audacity of blaming foreign powers for the ongoing crisis in Syria, absolving himself, and then acknowledging Iran’s ongoing support, stating: “Iran stands with the Syrian state, politically, economically and militarily” (see assad-interview translated). In a recent op-ed in aawsat, Amir Taheri, formerly the editor-in-chief of Iran’s Kayhan daily, addressed Iranian Supreme Leader’s decree that Assad, who is treated as a controllable puppet by Tehran, must stay in power – period,” no matter the consequences for the Syrian people. The silence of media outlets on this issue is stunning.