Trita Parsi and the Iranian-American Torpedoes

A few weeks ago, we brought you some interesting news about Trita Parsi, head of the National Iranian American Council (NIAC), going after AIPAC and seeking donations in order to lobby on Iran’s behalf instead of doing what NIAC claims it was founded to do – namely, boost the participation of Iranian Americans in American civic life.

Now, Parsi is at it again, lambasting Senator-elect Tom Cotton (R-AR) for advocating sanctions against Iran – both on Twitter and in an email sent to NIAC supporters, in which he asked for donations to “ensure that we have the resources we need to preserve” the ongoing nuclear talks.

Parsi also singled out hardline Congressman Mike Pompeo (R-KS) for advocating a military strike against Iran’s nuclear program, saying his comments underscore what “NIAC has always said – diplomacy must succeed to prevent war.” He went on to describe the efforts NIAC – a nonpartisan organization purporting to represent a community within the US – would have to undertake in order to “halt Congressional attempts to derail diplomacy and push us into war.” 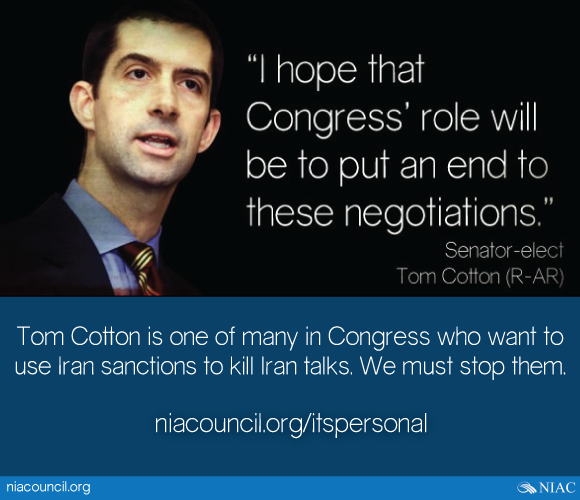 We question whether the “us” in Parsi’s email refers to the US, to Iranian Americans or to Tehran itself. But that’s beside the point. The “nonpartisan” Parsi repeatedly rips into US lawmakers who support economic or military measures against Iran, but gives nary a thought to expressions of belligerence on the Iranian side, instead waxing poetic on the current “opportunity for peace.”

Peace? While bragging that the US military option is “off the table” but that Iran is “geared up at any moment” to respond to an attack, Iran’s military this week unveiled, displayed and tested everything from suicide drones and missile defense systems to cruise missiles and torpedoes in a major drill, reportedly the largest ever conducted in the country. Meanwhile, President Hassan Rouhani announced a 33% hike in military spending – a commitment Iran’s beleaguered economy might not even be able to sustain. Now we know Parsi’s worried about a “game plan” that could “torpedo the negotiations” – so what would he call war games with no shortage of, well, torpedoes? (Not a coincidence, hopefully.)

4 comments on “Trita Parsi and the Iranian-American Torpedoes”