As Iran and world powers tried to salvage the nuclear talks they have been engaged in for much of the past year ahead of the July 20 deadline for a final-status deal, Iranian leaders have been using media outlets to pressure the West into acceding to their nuclear demands.

In a June 13 op-ed in The Washington Post, Iranian Foreign Minister Mohammed Javad Zarif “assured” Western readers that a “realistic” deal would ensure Iran’s nuclear program remained “exclusively” peaceful – if only the West let go of its “obsession” with sanctions, “excuses” about breakout capability, “phobias” that Iran would build a bomb and, finally, “illusions” regarding nuclear progress. 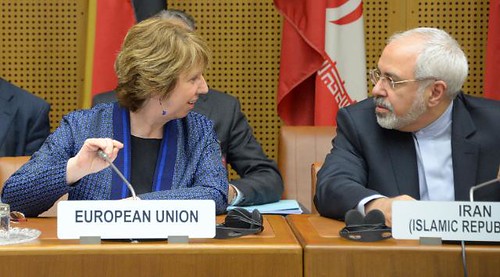 According to Zarif, the situation is simple (or ominous, depending on how critical a reader you are): America stuck by a policy of “maximalism” and refused to allow Iran to enrich uranium. In response, Iran built 19,800 centrifuges in 10 years, raised its enrichment capacity from 3.5 to 20 percent and nearly commissioned the heavy water reactor at Arak.

“Nobody can rewind the clock,” Zarif said. He meant to say that Iran now has the ability to continue building its nuclear program as it wishes, with or without the West’s consent – at any pace.

It took Iran just ten years to advance its nuclear capabilities dramatically – and dangerously. If the West does not make “sacrifices” and sign a deal on Iran’s terms, says Zarif, Iran will use all its “knowledge and expertise” that “can’t be negotiated a way” – a veiled threat? – to make even more progress on the nuclear front, possibly reaching breakout capability (not just an “irrational” excuse anymore, is it?).

Ultimately, the question remains: to what end can and should the West negotiate only on Iran’s terms? And why have leading Western commentators not pointed any fingers at Zarif for admitting that Iran has the West right where it wants it – between the rock of sanctioning Iranian enrichment and the hard place of watching it go on unchecked?